For over 18 years Les Mis, as it is fondly called, was a landmark at the Palace Theatre in Cambridge Circus. The face of an urchin girl stared down upon the bustling crowds who passed through the intersection en route to the whole of London’s West End. Then in 2004 the production had to find a new home and it has been in Shaftsbury Avenue’s Queens Theatre ever since. Last year it celebrated 30 years with a big spectacular Hollywood film. But tonight I was finally getting to see what has kept this iconic show going for all those years. The stage musical.
As the audience files into the beautifully restored traditional auditorium we are greeted by that iconic picture of Cosette seen on a thousand buses and underground billboards. As the lights dim her face is swathed in smoke and we see Jean Valjean working out his last days on the chain gang under the watchful eye of his sworn enemy Javert. The scene is set for a battle between the two that will last more than 17 years.
The production makes great and creative use of the theatre’s huge revolving stage. Not only are sets turned into sight but chases are excitingly enacted. In addition there are two huge sets that are wheeled on from the wings and create the street buildings and the eponymous barricade.
This is a huge cast playing vocally demanding roles so it is no surprise that many of the lead characters were not the main cast on a midweek matinee. But, as this is a production that relies on talented singers rather than star names, this mattered not a jot.
The heartbreaking depiction of early nineteenth century French poverty is enlivened by the comic turns of M & Mme Thenadier, the innkeeper and his wife, but even they are without scruples or morals when it comes to trying to earn a few francs.
Les Miserables is chock full of hummable songs, most recently I Dreamed A Dream. Fortunately the producers have resisted the temptation to build a SuBo moment into the show and, while Fantine’s rendition is superb, it does not elicit any unseemly reaction aside from a well deserved ovation at its conclusion.
Les Miserables has been running in London’s West End for 30 years and has since opened internationally and has become the longest running musical in the world. Ever. I wouldn’t be surprised if it runs for another 30 years. And another

What happens when, after decades of waiting, Charles finally ascends to the throne? What happens if he turns out to not be right for the job?
What happens if he meddles in constitutional matters?
This is the premise of Charles III currently running at Curve and out on tour.
Written by Mike Bartlett as quasi-Shakespearean in iambic pentameter (mainly) the whole story unfolds like one of the Bard’s tragedies.
The set itself is spectacular, especially for a touring production, and evocative of  Game of Thrones, not the last time I was reminded of that tale of sovereign battles.
As the cast solemnly file on carrying candles it is immediately obvious we have joined the finale of the late Queen’s funeral and Charles, Robert Powell in majestically petulant form, is itching to take up his inheritance. With Camilla by his side fighting his corner there are more than a few hints of Lady Macbeth as she pushes him to wield his new found power and take his rightful place at the head of the country.
As the drama unfolds we discover several almost familiar characters; Prince Harry is a libidinous Tim Nice But Dim; James Reiss, the palace PR person, is very much in the mould of the PM’s Mr Humphreys and the Prime Minister himself is reminiscent of  a blustering Lloyd George.
As we come to the end of the first half Charles provokes a constitutional crisis by refusing to sign off a bill he disapproves of. Anarchy ensues as the instability of the monarchy filters down to the people and unrest bubbles up only to be quashed by the interjection of Prince William with his own Lady Macbeth, Kate, egging him on.
A great cast led by Robert Powell peoples the stage with a vast array of characters in this satirical imagining of what may come to be.
While so much of the story is entirely believable I do question whether resorting to cheap jibes about James Hewitt and cars in underpasses were entirely necessary. Mike Bartlett is such a good writer that he doesn’t need to resort to such easy lazy  laughs.
Charles II runs at Curve until 30 January and then is touring
More information at http://kingcharles3play.co.uk/tour-dates/ 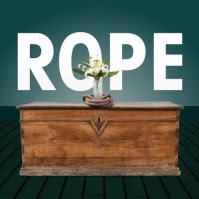 “psychological thriller based on real events”

On 21st May 1924 Nathan Leopold and Richard Loeb committed what they thought was the perfect crime; the murder of a completely unrelated young boy, purely for the intellectual ‘fun of it’, as an ‘intellectual exercise’. Of course it was far from perfect and, through a couple of simple errors on their part, they were caught. This horrifically immoral crime inspired several books, plays and movies. Notable of these was Alfred Hitchcock’s Rope and, the source material for that film, Patrick Hamilton’s play presented here in a modernised version.
The single set is beautifully reminiscent of a faux art deco apartment high above central London and the lighting serves admirably to heighten the tension as the macabre dinner party is thrown on the antique chest containing the body of 14 year old David Kentley, son of one of the guests. Robert Bilic’s controlling and in control Wyndham Brandon perfectly pulls the strings of Matthew Jarram’s almost hysterical and increasingly drunk Charles Granillo, his partner in crime.
As the evening wears on various guests arrive as they wait for the one person Brandon considers his intellectual equal, Rupert Cadell and thus begins a masterful display of verbal jousting over the ill fated contents of the trunk as Brandon teases his mentor.
This psychological thriller, based on true facts, makes for a suspenseful evening’s entertainment. Occasionally funny but scarily true to life
Rope is on at The Little Theatre until Saturday 23rd January
First published in Western Gazette