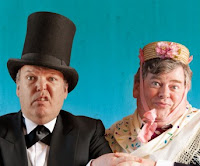 It is entirely appropriate that my last review for this year and under the old guard at Upstairs at The Western should be for the renowned and very popular Foundry Group. In what has become an annual treat for playgoers at The Western we have had our taste buds tickled by uproarious tales of wrestlers, Henry VIII, magnificent flyers and now dear old Sir William Schwenck Gilbert, the lyricist half of  Gilbert and Sullivan.
I for one didn’t realise that, prior to his musical collaborations with Mr Sullivan, Gilbert was a prodigious writer of  tall tales, comic rants and parodic reviews as a means of making ends meet.
The Foundry Group have maintained their high standard by collating five of his more outrageous tales from the latter half of the 19th century and adapted them for two actors. These Victorian comic stories were published in the magazines of the day and proved very popular, especially when accompanied by Gilbert’s own illustrations.
In David Mountfield and Brian Mitchell this production has two very able character actors who are very at home with a variety of accents and quick costume changes. Watching these sketches one can clearly see where modern performers like Tommy Cooper, Tony Hancock and Benny Hill got their inspiration from. Accompanied by hilariously bad ‘special effects’ and more awful props than a Play School toy box this is an hilarious evening of fun that you can take even your maiden aunt to.
There are still a few tickets available for Saturday night’s performance and I would urge you to grab one if you can.
Tickets for Saturday at www.upstairsatthewestern.com
Full details of future dates are at www.foundrygroup.co.uk
First published on Western Gazette and London Pub Theatres
No comments:

In what is becoming a wonderful annual tradition at Curve yet another Roald Dahl story is brought to life in the studio space. This year, after the astounding success last year of The Witches, we have The Twits. This is the tale of two of the horrible-ist, dirtiest, most loathsome people who, not being bothered to work like normal people, decide to exploit a family of monkeys who they have captured deep in the rain forest and trained to perform tricks.
This production is jam packed full of audience participation, circus skills, songs and gross jokes. The perfect Roald Dahl story!
A small cast of seven bounce around the set playing instruments, singing and dancing.
The set, a caravan, starts off as a storage container as the talented cast whip the audience up into a participation frenzy. As soon as the action starts the sides fall away to reveal the cess pit that is The Twits barely habitable home.
The script is adapted by acclaimed children’s author David Wood (who also adapted The Witches) and is perfect holiday fare for children of all ages.
Tickets are available at http://www.curveonline.co.uk/
First published on Western Gazette