“a sure fire winner for the young and young at heart.”

David Walliams, he of Britain’s Got Talent and Little Britain, has garnered a reputation as a successful writer of children’s books. Several, of course, have already been adapted for the stage and Awful Auntie is the latest and probably won’t be the last.
As is customary for a Walliams show this is a battle of evil adult against spunky child. In this case Stella’s  evil Aunt Alberta is plotting to take possession of Saxby Hall, burn it down and create an owl museum, an Owlseum, if you will.
Awful Auntie borrows elements from several popular children’s books; Harry Potter and Roald Dahl to start with. This is not to denigrate the book or the show but to acknowledge its antecedents.
While the first half is a little wordy as the scene is set, the second half packs loads of magic and stunts in as Stella turns the tables on Aunt Alberta with the help of Soot, the friendly ghost.
Of course Timothy Speyer as Aunt Alberta, channelling both Walliams himself and Matilda’s Miss Trunchbull, has great fun stealing the show. As Stella, Georgina Leonidas (herself a former cast member of the Harry Potter films as Katie Bell) discharges herself well flying around the stage avoiding her Aunt and keeping up with Soot. Soot, the friendly ghost, is played by Ashley Cousins as a cross between Frank Spencer and Joe Pasquale climbing all over the set in an assured way as he tries to keep Stella out of trouble. The final cast member is Gibbon the butler, played with eccentric charm by Richard James and very reminiscent of David Jason’s doddery old timer. But of course we can’t forget Wagner. Not the composer but a huge owl expertly puppeted by Roberta Bellekorn who saves the day in several ways.
The set was very creatively designed by Jacqueline Trousdale and consisted of four towers which revolved and moved around the stage by remote control to create rooms within Saxby Hall including the cellar.
With lots of  smut for the children and a few jokes for the adults this is a sure fire winner for the young and young at heart.
Awful Auntie is on at DeMontfort Hall until Sunday with tickets available on most performances. 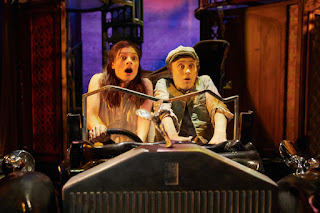 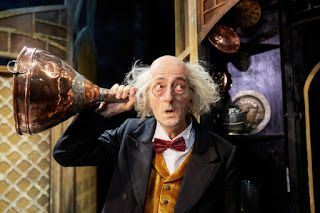 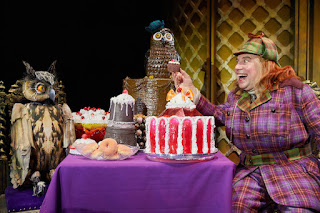 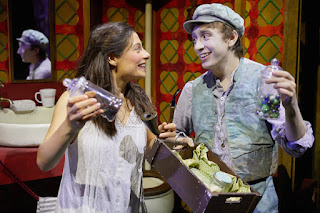 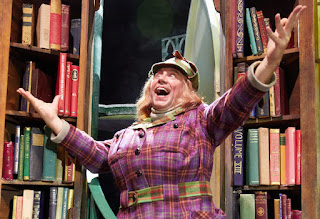 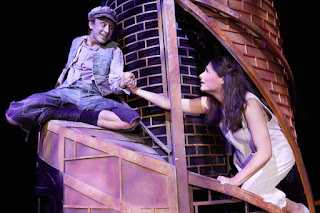 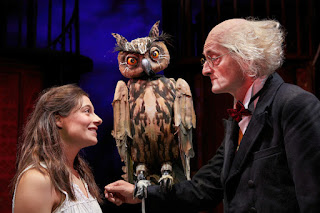 “Sherlock Holmes has retired to obscurity.”

The premise of this new play is that Sherlock Holmes has retired to obscurity after supposedly dying in The Final Problem and ended up in a  cottage on the Sussex coast keeping bees. It is from here that events conspire to drag him back to 221b Baker Street where Dr & Mrs Watson reside and are looked after by Miss Hudson, daughter of their former housekeeper. Holmes is convinced that he is being stalked and liable to be killed. Can he work out who his killer is before they get to him?
I wanted there to be an energy, a Benedict Cumberbatch zing to both the dialogue and the action. But there wasn’t. The production lulled me into a relaxed state akin to listening to whale music. I couldn’t summon up any enthusiasm for the play.
It wasn’t that anything was wrong with the production, just that there wasn’t anything right.
The actors acted well, they projected without microphones and every word could be heard. The set looked nice, a back cloth separated the blank foreground from the busily dressed study behind. Scene changes were imaginatively covered by a curtain sliding across the stage but was more animated than the onstage action. The whole thing was very pedestrian. It looked and sounded like a radio play transferred lazily to the stage.
Robert Powell as Holmes did his best, enunciating well and declaiming with conviction. Timothy Knightley as Dr Watson was everything we could ask for as a replacement for Nigel Stock from the 60’s  TV series. Liza Goddard was suitably de-glamorised for her role as Mary Watson. Thank goodness for Anna O’Grady’s Miss Hudson for some much needed light relief.
At least we were comfortable in Curve’s air conditioned auditorium.
Tickets for the rest of the week’s run are available at www.curveonline.co.uk 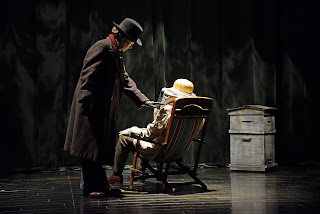 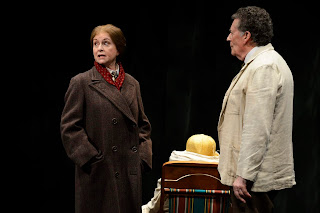 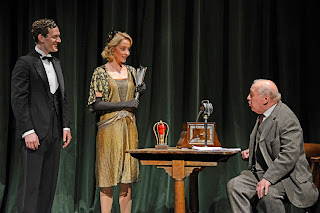 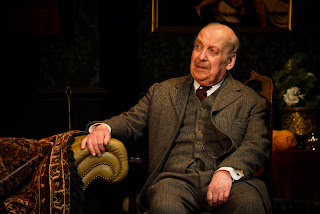 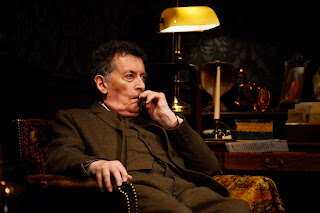 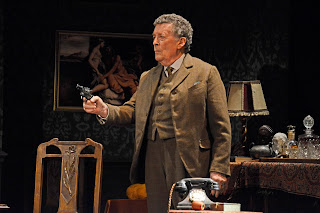 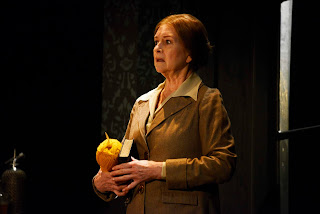 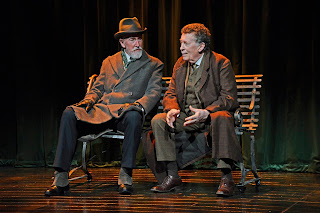