“revels in every glorious opportunity to shock.”

Back in the 80’s I used to run a famous pub in South London called The Goldsmith Tavern, the starting place for many famous comedians including Vic Reeves, Rory Bremner and the inimitable Julian Clary, then known as The Joan Collins Fan Club, much to the Dame’s displeasure. Reverting to his real name Clary has garnered a reputation unique to him.
For his 30th anniversary of clambering onto a stage to entertain a room full of punters, Clary is in the middle of a nationwide tour bringing joy and outrage to us ordinary folk.
As he narrates tit bits from his illustrious career we are treated to rather more detail of his unexpurgated life than perhaps some would want. His drug taking is an especially unedifying period of his younger life but is told in all its gory detail as a lesson to the unworldly.
As is to be expected Clary shies well away from a double entendre when a single one is available and revels in every glorious opportunity to shock while shamelessly namedropping everyone from Paul O’Grady right up to Dame Joan Collins.
Julian Clary’s The Joy of Mincing is out on tour throughout the autumn. Full details at http://julianclary.co.uk/

The Importance of Being Earnest

Review by: Paul Towers, 11 October 2016
The Importance of Being Earnest by Oscar Wilde
A Curve and Birmingham Rep co-production
Curve 6 – 29 October

Watching an Oscar Wilde play you are guaranteed an evening of sparkling wit and including, in the case of Earnest, virtually every notable quote Wilde is remembered for.
However, in this revival Curve’s Director Nikolai Foster and designer Isla Shaw have ramped up the sparkle to an almost parodical level whereby the set almost outshines the dialogue. The stage is lined, side to side, top to bottom with mirrored panes meaning there is nowhere to hide from the razor sharp epithets and aphorisms of Wildean wit. It also illustrates perfectly the inherent narcissism, decadence and vanity of the world of Earnest and his companions. While the manners and furniture are Victorian the costumes are an interesting melange of period and modern sensibilities which sits perfectly with the set.
This comedy of manners relies heavily on every phrase being enunciated, projected and audible to every member of the audience and this cast made sure every line was heard clearly.
There is something beautifully rhythmic about the prose which means that all the laughs seem to be written into the text and the actors rarely have to pause and wait for the audience to stop laughing.
While Edward Franklin’s fey, dissolute Algy and Fela Lufadeju’s John Worthing are the central characters of the story it was Cathy Tyson’s Lady Bracknell we were all holding our breath waiting for. Would she do an Edith Evans or a David Suchet when it came to THAT line? Well I am pleased to say that Ms Tyson copied no-one and made the handbag line her very own with a fabulous sense of outraged conservatism. As the leading (young) ladies of the piece Martha Washington and Sharan Phull as Gwendolen and Cecily are a joy to watch as they vacillate between outrage at being deceived and their desire to marry their beaus. Angela Clerkin’s prissy Miss Prism throws herself around in faux outrage as her past deceits find her out. Each of the characters are explicitly drawn and none are wasted. Even Darren Bennett’s Merriman’s largely silent butler gets unwritten laughs from a raised eyebrow or a sigh. While Dominic Gately’s Dr Chasuble channels his inner camp to bring the pastor to life.
Scene changes were beautifully choreographed utilising the many doors set within the mirrors and the interval, much like a television commercial break, merely paused the action while the audience caught its breath.
This is a production not to be missed and deserves to tour forever

The Importance of Being Earnest runs at Curve until 29 October.
Full details available at Curve website
First published in Western Gazette 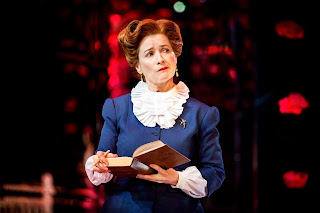 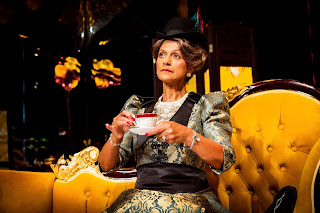 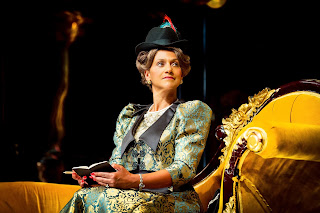 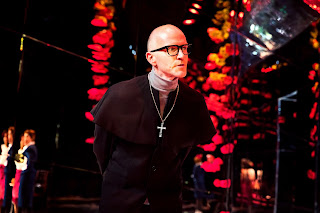 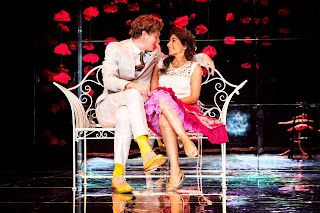 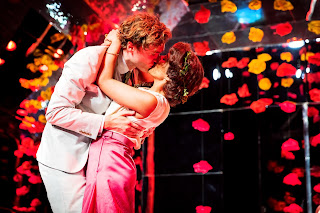 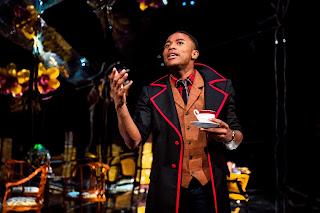 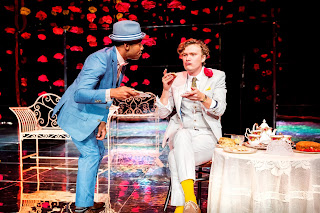 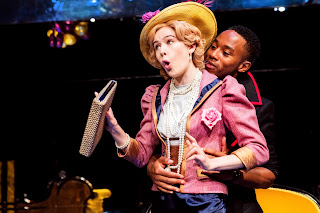 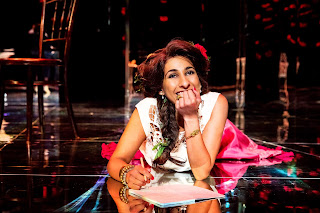 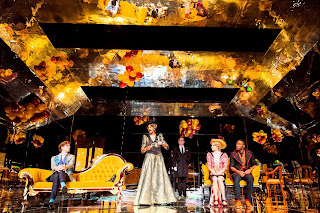 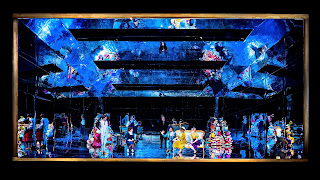 “an undemanding evening of musical theatre”

The Pajama Game (and yes, that spelling is right) is not a taxing story. If I tell you that the film starred Doris Day you can guess the level of  saccharine and hearts and roses.
The story revolves around a labour dispute whereby the workers in a pajama manufacturing factory are up in arms because the management won’t give them a 7½c payrise in line with other companies. To complicate things the Grievance Committee head and the new Supervisor fall in love.
While the story might be quite slight the songs are mostly very taxing to perform. There are several standards amongst the soundtrack, namely Hey There, Once A Year Day and Hernando’s Hideaway. But most of the rest, and there are a full 21 numbers aside from the overture and ent’act, are very demanding to sing.
The IDOLS (Leicester’s Infirmary Dramatic Operatic and Literary Society) have long had a reputation for producing classic standard musicals for the last 60 years as a means of fund raising for various medical causes. So it is no surprise that they have chosen to resurrect this 1950’s musical.
The entire cast are incredibly talented and have been working all year for this, their annual offering at The Little Theatre. Jodie Blowfield and Vaughan Ashcroft as Babe and Sid have both the singing voices and stage presence to lead the company while Martin Bell as Hines and Debbie Neath as Mabel have great comic routines together. Jordan Handford as Prez is superbly, creepily pervy.
Unfortunately this great cast was let down by persistent sound issues with microphones not coming on in time and feedback . On top of this the orchestra, which I assume is all amateur and led by experienced Musical Director Tony Rifugiato (who should know better), had a very duff trombone player on the brass section who missed many notes and those he did hit were invariably flat!
Hopefully these problems can be ironed out as the week progresses.
But all in all this is an undemanding evening of musical theatre that comes to us straight from the 50’s and thus won’t offend your maiden aunt and won’t tax your intellect. 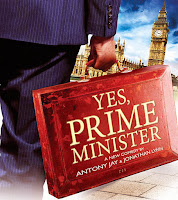 Oh joy! This is a seriously funny piece of political satire that, even though it was written in 2011, still resonates today and continues to puncture the pomposity and obsequiousness of parliament and the civil service with very few updates. In fact some references have accidentally become hilariously appropriate.
Right from the moment the metaphorical curtain rises the snappy one liners tumble forth and the laughs never stop.
The story is all about a weekend at Chequers where the PM is entertaining the Kumranistan ambassador with a view to signing a major oil deal which will save the EU from bankruptcy. As the weekend progresses PM Jim Hacker ties himself up in every tighter knots, some of his own making but many of Sir Humphrey’s.
As Hacker gets progressively more frustrated and bogged down Sir Humphrey steps in to try and diffuse the situation with his impenetrable business-speak obscurations designed to confuse but not clarify.
Yet another beautiful set design by Alec Davis of an old country study, oak panelled with bookcases and French windows allows for the obligatory farcical entrances and exits while a large screen on the back wall is used to good effect for news footage and the credits.
A very strong cast is led by David Lovell as Jim Hacker, Charles Moss as Sir Humphrey and Joff Brown as Bernard Wooley. Moss, in particular, garnered several personal, well deserved rounds of applause for getting his tongue round several of Sir Humphrey’s ambiguous, incomprehensible and positively obfuscated soliloquies.
For those of us that remember the 80’s when this was on TV this is theatre heaven; a sharp script with very familiar characters perfectly preformed to a very appreciative audience. What more can you ask for an evening’s theatre?
Yes, Prime Minister is on at Little Theatre until Saturday 8 October
Full details at www.thelittletheatre.net/

First off, I have to admit I have never seen the film that this play is based on so I have gone into this with no preconceptions and a completely open mind. All I knew was that it was set in a prison.
The curtain rises to three naked men standing with only a small package of their personal effects to cover their vulnerability. These are new prisoners, fresh meat for the predatory older lags. The set is a suitably industrial looking combination of steel girders and iron plates serving as the various prison interiors. This is Shawshank, an American penitentiary in the late 1960’s, a violent, dog-eat-dog environment into which is thrust Andy Dufresne, wrongly convicted of  the murder of his wife and her boyfriend.
This is not a play for the easily offended as the first 20 minutes include no end of profanity, violence and male rape. Add into this mix the inherently corrupt prison officers and it is easy to see how the entire community verges on the precipice of turning feral at any moment.
The three main roles are Andy Dufresne, played by Paul Nicholls, Warden Stammas, played by Jack Ellis and Ellis ‘Red’ Redding, played by Ben Onwukwe. These are the characters who tell the story and should be strongly cast for the pivotal roles they play. As this production is without the benefit of personal amplification it is incredibly important that the actors can project and enunciate so that even the gallery can hear them.
In this case it was abundantly obvious that Messrs Ellis and Onwukwe were trained stage actors. Paul Nicholls is not. In many instances his mumbling, probably a habit picked up from his days as a TV actor, meant much of his dialogue was missed by anyone not in the front two rows. Fortunately much of his character’s role is to be the calm at the centre of the storm as the drama unfolds around him.
However, that aside, this is a powerful production of a damning indictment of the American prison system at the time.
While this sounds as though it is unremittingly downbeat there are plenty of little laughs inserted to lift the mood, as is to be expected when you realise the adaptors, Owen Neill and Dave Johns are both stand up comedians.
The Shawshank Redemption runs at Curve until Sat 8th October and then continues on tour until the end of the year
First published on Western Gazette