Shakespeare has always seemed to me to be one of those elitist things that it is more important to be seen at than to understand or enjoy. So it was with trepidation that I accepted a request to review Curve's current Community Production of his Richard The Third, rather an apt choice in view of his recent re-interment in the city.

Director Nikolai Foster, Curve's new Artistic Director, says he wanted to stage this bloody story against a backdrop of contemporary Russia and set on a stage depicting a bomb site. This admirably enabled the battle scenes and various assassinations to be done with modern weaponry rather than trusting a largely inexperienced cast with swords and bows & arrows. Especially in the second half there were pyrotechnics galore to highlight the uprising of warring factions and the eventual demise of the titular monarch on a Bosworth field. Creative lighting and sound fill the Studio space so you feel right in the action.

Right from the start local actor Mark Peachey's Richard commands the stage and strides the length and breadth filling it with bravado, comedic asides and finally his death throes. The stereotypical hump that Shakespeare erroneously ascribes to Richard is more accurately represented by a set of alien-like vertebrae down his back. Supported by a superb cast of both professional and amateur actors this production continues the worthy tradition of community theatre by the people of Leicester for the people of Leicester.

The inherent problems of staging in the round are compounded by the necessity of concentrating so hard to decipher Shakespeare's idiosyncratic phrasing and language. I think I managed to get the gist of the tale but missed out huge chunks of the detail because I couldn't decipher the dialogue. This is no reflection on the cast or the director. In fact Nikolai deserves a huge vote of thanks for cutting the piece down from its original 4 hours!

In essence this is a very worthy production that runs to Sunday 9 August.

I have not been converted to Shakespeare and would not go and see any other of his work. This vibrant and athletic production is probably the nearest I will ever come to an accessible work of Shakespeare. It is something to brag that I have seen despite not understanding much of the dialogue. I came away wondering if I had been seeing The Emperor's New Clothes. 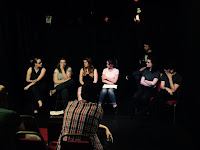 Story City is 'a festival to share stories in different forms including theatre, film, spoken word' and just about every method of entertaining and informing. The festival has been 'created by a group of local artists who want to promote new and emerging artists'. The festival contains upward of 19 performances in a variety of venues across Leicester city centre.

Tonight I was at Upstairs @ The Western to see a first public read through of Sophie, a story of abuse, loneliness and, appropriately for these troubled times, neglectful authorities. This piece has been created with the support of Off The Fence, The Western's theatre company in residence, who have provided space to work on the play and rehearse over this week.

Sophie is about many things, teen peer pressure, children having to grow up too fast and the dangers they can face at an ever younger age. Sophie is 13 years old, the precocious, street-wise child of a single parent family. Like all teenagers she alternates between being a know-it-all who has done everything and the child she still is. Her short life has forced her to face up to and deal with all sorts of adult issues, murder being one of them.

Sophie is the product of Thread Theatre company, founded by graduates of Loughborough University who strive to 'develop and produce new writing from young playwrights, concentrating on work with asocial conscience.'

It was fascinating to be sat in the audience of a work in progress . The Q&A session afterwards was very informative for both the cast and the audience. I look forward to seeing the finished work in due course.

Thread Theatre can be found on www.facebook.com/threadtheatrecompany
More can found about The Story City Festival on www.storycity.co.uk which runs til Sunday 12 July 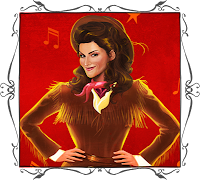 Turning up on Thursday's matinee performance to see the wonderous Jodie Prenger whip cracking her way through this musical theatre standard we were disappointed to find that Ms Prenger was ill and her understudy, Christina Tedders, was on for her instead. Several people around me voiced their disappointment at not seeing the star but, with scant hours to prepare, Ms Tedders gave a great performance. The girl can act, she can sing and she can dance up a storm.

Calamity Jane on stage is the ultimate feel good show that retains all of the best remembered elements of the Doris Day film and gives them an edgier feel. This is, probably, a much more realistic representation of the 'wild west' than the Doris Day film and all credit must go to Curve's Nikolai Foster for his visionary direction, Matthew Wright's set and Richard G Jones' lighting.

The entire cast are what is known in the business a triple threat. That means they can act, dance and play musical instruments. Most of them masters of more than one. This enables them to do away completely with an orchestra pit and adds an immediacy to the onstage action. It also means they can add depth to the ensemble numbers

The simple, single set of an old style western show bar serves, with creative lighting, as many locations. Very imaginative use of props even convinces us of a stage coach and a railroad train!

Tom Lister (formerly of Emmerdale and the obligatory ex-soap star for all touring productions) more than fills the battered cowboy boots of Wild Bill Hickok, the only man to (almost) tame Calamity Jane

Calamity Jane is on at Curve until Saturday and then on tour
http://www.calamityjanetheshow.com/
First published in Western Gazette