Of Mice And Men 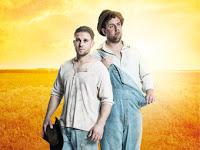 Review by: Paul Towers, 23 May 2016
Of Mice And Men by John Steinbeck
A Birmingham Rep and The Touring Consortium production
Curve 23 – 28 May 2016

“the denouement is as inevitable as it is shocking”

Steinbeck’s novella, based on his own early experiences of being a migratory worker in 1920’s America, is often required reading is secondary schools, hence the large number of school children in the audience tonight. It is also a continuing source of angst amongst liberals for its overt racism and vulgarity.
The title is taken from Robbie Burn’s poem To A Mouse in which the lines “The best laid schemes of mice and men / Often go awry” appear.
The plot concerns the arrival of two migrant workers, intelligent George Milton and his sidekick Lennie Small, a gentle giant of a man with limited mental capabilities. George has a dream, to own a small  holding where he and Lennie will be safe and self sufficient. Teaming up with Candy, the injured bumbling old retainer, their goal is within sight but, as usual, Lennie’s social clumsiness brings the house of cards tumbling down and the denouement is as inevitable as it is shocking.
Steinbeck accurately catches the claustrophobia of  the smaller than small town mentality in the isolated ranch and the basic dialogue of those isolated from polite society.
The staging is simplistic in its effectiveness with just two sets. The stage opens with a blank wall with a door in it. The two migrants spend their last night beside a river prior to starting work on the ranch. It will also be the place for Lennie to run to should he get into trouble.
With beautifully choreographed precision the scene is changed to the inside of the bunkhouse with the myriad of furniture that requires.
William Rodell as George and Kristian Phillips as Lennie are perfectly cast, while veteran actor Dudley Sutton as Candy, the not-as-simple-as-he-looks amputee, is superb. Inevitably Monty the dog steals every scene he is in! 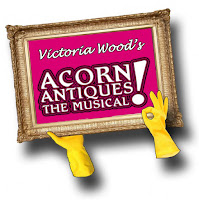 “Pull on your Marigolds and grab a ticket.”

When Acorn Antiques the Musical first hit the stage in 2005 with most of the original cast from Victoria Wood on TV, the first half was a backstage story of the rehearsals for a completely different show that the cast had signed up for. This version is largely the revival version from 2006 which wisely ditched the original first half which sought to send up all those earnest back stage avant garde dirges.
The action now goes straight to the main story of Acorn Antiques, complete with shaking scenery, swinging backdrops, missed cues and dodgy props. It goes without saying that the storyline is as believable as the TV series.
Wood manages to parody all manner of musicals including Sweet Charity, Blood Brothers (‘Oh, the plot is like Blood Brothers’. ‘Well, yers, just shorter and with more laughs’!), Chicago (a wonderfully self indulgent opening number in the style of ‘Fob Boss’), Little Shop of Horrors, no end of Disney songs and, my personal favourite, several Sondheim songs. Blissful musical theatre.
With a talented live band in the orchestra pit the singers were able to pause for the inevitable laughter to die down (that happened many times).
The entire cast were superb but especial mention has to go to Julia Glover-Kirtland as Mrs Overall, not only a very physical part but the stand out comedy role in the show. Her scuffling gait was almost like she was channelling Julie Walters. Josie Tweddle as Miss Babs was in turns lecherous and desperate with a great belter of a voice.
The plot, such as it is, concerns the hunt for Misses Babs and Berta’s mother, their father’s will and the prevention of a takeover of the whole of Manchesterford by the evil coffee purveyors seeking to replace all those quaint independent traders.
This revised version is a fitting tribute to the late great Victoria Wood, taken too soon.
Pull on your Marigolds and grab a ticket before Saturday.

I, Myself and Me

Any one who has taken the organised tour round Leicester’s modern Curve theatre will know that the building is riddled with immensely versatile spaces that are used for rehearsals, meetings, conferences and, especially throughout the Inside Out Festival, intimate performances.
As resident associate director at Curve pointed out in his introduction to this production, this is a work in progress and this was only it’s third performance in front of a paying audience.
I have nothing but admiration for anyone who can write and perform an hour of material on their own on a stage. Rachael Young is an experienced writer/performer who was recognised as a ‘Breakthrough Artiste’ by Curve in 2013.
I, Myself and Me is as series of expressive structured prose pieces exploring and explaining her development from a child to an adult. While these descriptive segments work well to illustrate the angst we all go through growing up, they are linked (?!) with increasingly bizarre bits of business which seem to have no connection with the rest of the piece. For instance, she spends a fair amount of time in the last third of the performance ‘planting’ a garden with flowers.
She seems to revel in including the audience in her work and I was very uncomfortable when she came and sat next to me at the start of the show and asked me the time.
I am sure that the right on trendy hipster theatre goers will lap this style of writing and performance up but I am afraid it left me quite confused as to what I was expected to take away from the event.
I, Myself & Me is on tour. Full details can be found on www.rachaelyoung.net 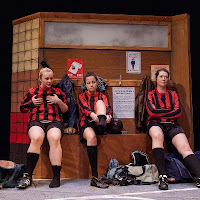 “a very timely examination of  women’s role in society.”

It is entirely appropriate that Girls With Balls returns to its home city in the very week that Leicester City Football Club succeeded in clawing their way to the top of the Premier Division against all the odds.
This is yet another successfully touring production from Off The Fence, the resident theatre company at Upstairs at The Western, Leicester’s only pub theatre.
Inspired by Tim Tate’s book of the same name, which documents the rise and fall of women’s professional football from the late 1880’s until the FA banned it in 1921, this has three timelines which are used to illustrate the differing attitudes to women against the backdrop of  their participation in the beautiful game.
In 1921, just prior to the FA forbidding women participating in professional football, the three women in the cast are playing regularly and earning more money than their day jobs in the factories.
In modern time the restrictions had long been lifted and the girls play for the thrill of it. Nevertheless it provides them with a much needed respite from their home lives.
Months later and they find that they are being sidelined again as their sole football ground is being torn down by an unsympathetic local council. The girls decide to make a stand and chain themselves to the pavilion to prevent the demolition squad doing their worst. It is then that things spiral out of control.
A small cast of three women and one man play all the characters on a revolving changing room set. More often than not the characters change costume onstage to avoid emptiness.
Terrific acting from the entire cast had us laughing one minute and, in the case of one over exuberant audience member, rooting for a protagonist to get their just deserts the next.
Off The Fence’s resident artistic director, Gary Phillpott, steers the play confidently through the stormy waters of this very timely examination of  women’s role in society.
Girls With Balls is in the middle of a nationwide tour and full details of dates can be found at http://off-the-fence.com/

Upstairs at The Western http://upstairsatthewestern.com/
First published  on Western Gazette
No comments: