“alone with a piano, Rosemary Ashe fills the Curve’s Studio.”

A while back Ms Rosemary Ashe was cast in her dream role, Momma Rose in Gypsy. Unfortunately the revival floundered in the planning stage but Ms Ashe was so enamoured with the lyrics that she decided to put together a one woman show featuring the songs. As she researched the background to the story she was surprised to discover that the life of the definitive Momma Rose, Ethel Merman, would make a great vehicle upon which to hang some songs from Gypsy and a selection of the huge number of Ms Merman’s back catalogue. Thus was born Call me Merman.
On a simple plain set Rosemary and her accompanist, Nathan, try to get in as many of the Broadway diva’s vast repertoire as possible. This, of course, would entail a show lasting several hours so some numbers are barely more than a line or two while others are almost the complete song.
There were lots of surprising selections. Most of us only know the few routines we have seen in Ethel’s film performances but the majority of her work was on the stage and, this side of the Atlantic, we were not fortunate enough to see much of that.
While I am no stranger to the aural delights of  a belted out Merman standard I was delighted to discover she was also the mistress of a tender love song.
Merman was incredibly lucky to have some of the greatest composers of the day create songs for her
From the moment the lights went down and Ms Ashe strode onstage the audience was enraptured as we were led through the life of one of Broadway’s most enduring stars. Not only were we treated to a battery of musical numbers but these were interspersed with anecdotes and details of her chaotic private life.
All this is done with just an upright piano and a strident voice, no amplification. Ethel would have approved!

Full details of the tour at www.rosemaryashe.com
First published on Western Gazette

Saturday Night Forever is a powerful monologue of love found, lost and friendship forged from the ashes of tragedy and all told in a delicious accent straight out of the Welsh Valleys. It brought a tingle to the hairs on the back of my neck.
On a bare stage with an imaginative wall of what looks like heated radiators imbued with LED lights that move and change  colour to effectively suggest various locations, Delme Thomas’ Lee takes us on a roller coaster ride through his disastrous love life as he extricates himself from the debris of his totally unsuitable relationship with Matt. Resigning himself to Bridget Jones singledom, Lee is completely unprepared for his meeting of a new love at a party. Love  blossoms and is taken away violently one night.
By turns tragic and funny this show is on tour until at least the end of the year. Full details can be found on Facebook. Search for Saturday Night Forever Tour

The Ladykillers at The Little Theatre

A couple of years ago I saw the touring version of The Ladykillers at Leicester’s Curve and was very impressed with the staging, writing and acting. Leicester Drama Society’s production is equally as effective.
The set is outrageously unbelievable with a full three story house and every technical trick needed to tell this implausibly preposterous tale of a robbery gone wrong.
The story starts with the entrance of the most OTT pantomime villain in Martin Bell’s evil Professor Marcus, the ‘brains’ behind the bank job. Swooping around the auditorium like a predatory crow he swoops out just as angelic Mrs Wilberfoce, Angela Edwards ably channelling Michel Dotrice, totters around a similar path dispensing pleasantries to audience members before removing her hat and coat and tidying it away. Mrs W, a frequent reporter to the local constabulary, is wasting more police time with imaginings of Nazi war criminals running sweet shops in Kings Cross.
Then comes the arrival of Professor Marcus and his band of ne’er do wells who are to rent the old lady’s spare room for ‘band practice’. From then on this is farce at its best. Adapted from the Ealing Studios film by Father Ted’s Graham Linehan this a joyous homage to those old black and white Alec Guiness comedies.
The main cast of  seven have impeccable timing both physically and verbally as mistakes are made and covered up, slapstick abounds. Trapped into giving an actual recital the tone deaf quartet end the first half in a raucous cacophony of strangled cat noises.
The second half, following on from exactly the closing point of the first half, gallops towards the actual robbery and the most imaginative and hilarious car chase you will see in  a theatre! Anyone who has seen the film or the play will know that the second half is a long drawn out denouement whereby the villains get their just deserts. As the characters die off in ever more absurd and hilarious ways the deliciously and misleadingly dotty Mrs Wilberforce comes into her own.
The Ladykillers is on at The Little Theatre until Saturday 14th November. As the entire run is sold out the only chance of getting a seat is to call the box office on 0116 254 0472 and pray they have had a returned ticket. 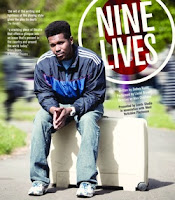 Tonight’s performance of Nine Lives was prefaced with a selection of songs by The Red Leicester Choir. Last time I saw this a cappelia group of community singers they gave us a fascinating selection of almost forgotten political protest songs. This time, well it appeared that the set had been thrown together to provide some appropriate accompaniment to the main feature. Unfortunately, while the first and last numbers were up to their past standard the intervening two numbers were ill prepared, unrehearsed, erratic and uneven. Very disappointing.
After a very short break while the stage was cleared of the choir we sat back and watched with appreciation the story of Ishmail, a Zimbabwean asylum seeker fleeing the notoriously homophobic regime of his home country.
Played by Lladel Bryant this is a story of how a young man is isolated from society by his refugee status and isolated from his fellow migrants by his sexuality.
While the narrative of the piece smoothly follows Ishmail’s bewildered arrival in what he perceives to be a land of freedom through his struggles to be granted asylum and his blossoming new friendship with single mother Becks it is interrupted several times by incongruous political mantra chanting. Which is a shame because the writing is plenty strong enough without it.
Bryant shines throughout the piece, especially when the script allows him to conjure up other characters like Becks and his room mate.
This thought provoking and eminently topical tale is sponsored by, amongst others, Leicester’s City of Sanctuary, an organisation that supports refugees and especially LBGT asylum seekers.
Nine Lives continues to tour well into the new year. Full details on the Leeds Studio Facebook page

It's A Wonderful LIfe

In 1939 Philip Van Doren Stern wrote a sweet little short story called The Greatest Gift which was made into a radio play and thence a 1946 film by Frank Capra starring James Stewart as George Bailey, a man who has put aside his dreams and aspirations to provide for his family and community.
George is pushed to the edge, literally, by the realisation that his mounting financial debts can only be resolved by his family cashing in his life insurance policy.
Looking down from heaven is Clarence, an angel who is desperate to earn his longed for wings. His boss decides that persuading George to forego his leap to oblivion from a river bridge will be ample to get Clarence his feathers.
As a strategy to dissuade George from ending it all Clarence allows him to see what his family and community would be like if he hadn’t been born.
Despite being in black and white It’s A Wonderful Life continues to be a must-see staple of Christmas TV schedules the world over.
So, how to transfer this to the stage? The solution has been to go back to its former incarnation as a radio play. The theatrical conceit is that we, the audience, play the part of the radio audience as if we were at a live broadcast in 1950’s America, complete with hilariously inappropriate but accurate commercial interludes between the acts.
A small but very talented cast of  six, plus an onstage sound effects girl, create the entire thirty two characters of the show using just their voices and a few hats. Their vocal dexterity is amazing to witness and their ability to switch instantly from part to part is astonishing. Each of the actors has to play several parts, except for Oliver Stoney who only plays George Bailey. The almost bare stage is peopled solely by a couple of microphones and a table of sound effect apparatus and yet you believe in the cold river, the snowstorm, the derelict house and our hero’s final redemption.
It’s A Wonderful Life is at Curve for one more day and then is touring nationally. Full details at www.wonderfultour.co.uk

The Element In The Room

“a great vehicle for getting science to the masses”

Marie Curie was born in Warsaw in 1867 and was, therefore, contrary to our perceived wisdom, Polish, although also a naturalised French citizen. She studied at the clandestine Floating University, an unofficial seat of learning for women. In 1891, aged just 24, she followed her sister to Paris where she continued her studies, conducted research and met her husband, Pierre Curie. In 1903 she won a Nobel Prize for physics with her husband and a physicist. In 1911 she won a chemistry Nobel Prize in her own name, the only person to ever win Nobel Prizes in two disciplines.
During her lifetime she discovered both polonium and radium. The latter being the basis of radiotherapy to this day. Her pioneering work in the discovery and development of radioactivity and the development of mobile X ray machines has saved millions of lives over the years.

Following on from last year’s thoroughly entertaining Darwin, this, the second in the science trilogy from Tangram, is just as much fun, just as entertaining and just as educational. With John Hinton’s winning combination of storytelling, groan inducing puns and silly songs this is a great vehicle for getting science out to the masses. The trilogy, wholesome and hilarious, should be compulsory viewing for children of all ages.