“a spectacular, romantic story of love against all odds”

I first saw Miss Saigon in the 2014 London revival and, it has to be said, I was blown away by the spectacle of a show that was firmly ensconced in a West End theatre. So I was prepared to be a little disappointed by a touring production. How mistaken was I? This new touring version not only matches the production values but, dare I say it, exceeds some of them. The role of The Engineer has been tweaked to make him even more slimy and manipulative. Hats off to Red Concepcion, who plays him like an immoral MC from Cabaret.
Miss Saigon originally opened in the Drury Lane Theatre in 1989 and was inspired by Puccini’s opera Madam Butterfly. Like the authors’ previous work, Les Miserables (yet another Cameron Mackintosh production), Miss Saigon was originally written in French and translated into English.
Set in Saigon as the Vietnam war is closing and US troops are withdrawing from the country, this is a spectacular love story that is inevitably doomed for crossing the race divide.
Chris, an American soldier (Ashley Gilmore)  tasked with helping to evacuate Saigon, seems to be above the rampant debauchery of the girls and their pimps trying to scratch a living and also find a way to get to the promised land of America. A new virgin, Kim (Sooha Kim), falls into the immoral clutches of The Engineer (Red Concepcion), so called because he can twist, manipulate and engineer any situation to his advantage. Naturally the two fall in love, despite the cultural obstacles, and wed. But Chris is called home and has to leave Kim.
Fast forward three years and Chris has married a white American girl and is settled into home life. Then his best mate delivers some astonishing news. Not only is Kim alive but she has Chris’ son. So begins a fight to bring them both to America, ostensibly to create an extended family.
The set is, I wouldn’t be surprised to find, probably largely the London set transported to us in the provinces. Most people who know anything about the production know about the helicopter. In fact it is the iconic symbol of the show. Well, it flies in just as expected, full size and able to transport fleeing soldiers. What I had forgotten is the outrageously camp fantasy sequence, complete with showgirls and a limousine, as The Engineer dreams of his American Dream.
All in all this is West End/Broadway standard musical theatre at its very best. It is a spectacular, romantic story of love against all odds.
Miss Saigon is on at Curve until 22nd July and then on tour. The rest of the run is completely sold out but any returns are released on the day only by applying in person at the box office.
If you can’t get to see it at Curve it is on at the Birmingham Hippodrome from 26 July til 23 September.
First published on Western Gazette 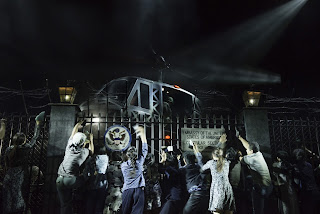