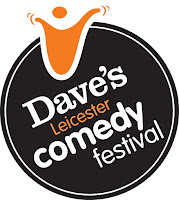 Once again Dave’s Leicester Comedy Festival has drawn to a close. While both the city, and to some extent the county, has been awash with comedic performances  in every corner, our very own contribution to the festival here in the city’s West End has more than made its mark.
While there has been a dramatic reduction in the local venues that have got involved with the Festival it has been left to the ever remarkable Upstairs at The Western to make sure that the West End has spent February laughing.
This wonderfully intimate theatre-over-a-pub gave us a wide range of entertainment to tickle our funny bones. The month started off in cracking style with George Egg, anarchist cook. This belter of a show gave us an hour of inspired lunacy ending with a three course meal cooked on stage! A very welcome return was made by the equally lunatic Conversation Garden does a Panel Show, Leicester’s very own anarchic love child of Shooting Stars and Blankety Blank.  As the month wore on we had a couple of very talented sketch show nights and an hilarious Audience With Henry VIII, seeing as how Leicester has been in a right royal mood since Richard III was re-interred. Upstairs at The Western book-ended their comedy season with a final return visit from Conversation Garden. This wonderfully local theatre has a packed season of events running right up the middle of June including their renowned Comedy Workshops from the middle of March.
Although, as I said, many local venues dropped out of the Festival this year a couple of new places have dipped their toes in the waters and it is to be hoped they will carry on providing us with entertainment.
An unlikely venue for comedy was the Church of The Martyrs in Westcotes Drive who hosted An Evening With Paul Kerensa, a script writer for BBC’s Miranda. Almost as unexpected was the Feed Bellies Not Bins Comedy Club at The West End Centre on Andrews Street.