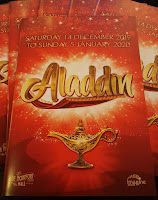 “a solid, entertaining show suitable for all ages”

It’s Christmas, it’s Leicester and it’s DeMontfort Hall. It can only be one thing, the now annual treat from Imagine Theatre, the pantomime! Oh yes it is, oh no it isn’t!
It seems that every year the panto gets better and better. Last year it was Peter Pan and this year, obviously having been pleased with the flying effects, it is Aladdin, complete with flying carpet.
Christmas is the season to be jolly and by golly was DeMontfort Hall ringing with the boos for Abanazar, laughs at the Widow Twankie’s near-the-knuckle jokes and the obligatory sing-a-long. This was festive family entertainment for all the family.
This Aladdin is a very traditional pantomime written by master script writer, Eric Potts. It has all the key elements you want from a festive treat.
Right from the start Abanazar (boy band Blue’s Anthony Costa) has the audience hissing and booing as he rips into Leicester, the football team and some of the more salubrious local areas. He is very effective as the villain of the night and is the butt of a running joke throughout.
Local lass Sam Bailey, making her third appearance in panto at DeMontfort Hall, is So Shi, lady in waiting to Princess Jasmine and eventual wife of the Emperor. This time round she is given full reign to show off her amazing singing voice as well as showcasing her comedy skills.
When it comes to comedy Dame Widow Twankey (Leicester Radio’s own Martin Ballard) and Wishee Washee (BGT’s Paul Burling) make a very effective double act keeping the laughs going from curtain up to curtain down including a charming routine involving 4 youngsters from the audience.
Aladdin is played by young magician Matthew Pomeroy and he is given the opportunity to show off his not inconsiderable magic skills throughout the show, especially using Princess Jasmine (Natasha Lamb).
CBBC’s Nathan Connor is a rapping Genie partnered with Gabriella Polchino as the Spirit of The Ring. The cast is filled out with young local dancers.
Once again Imagine Theatre has come up with a solid, entertaining show suitable for all ages. A lot of the one liners will go over youngsters’ heads but there is nothing to provoke awkward questions at a later date.
Aladdin runs until Saturday 5th January and there is a special relaxed performance on Thursday 2nd January at 1pm. Some tickets are still available for most dates. 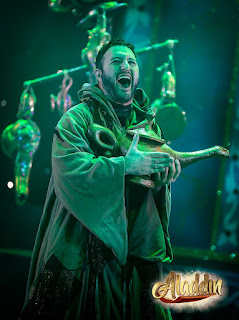 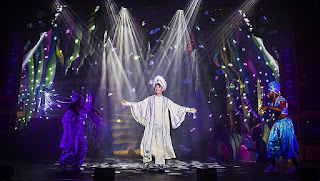 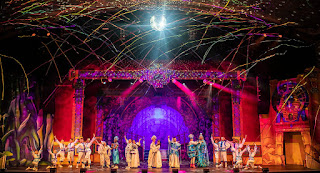 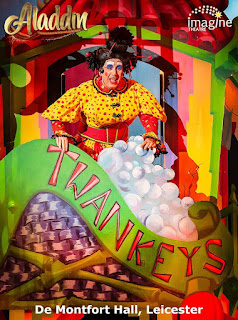 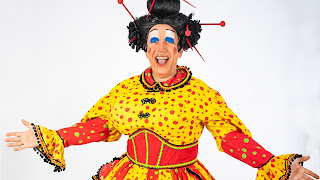 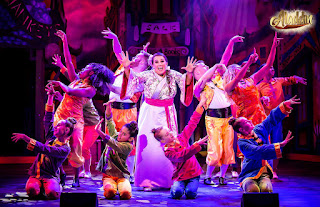 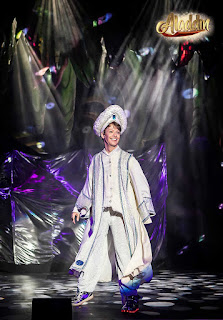 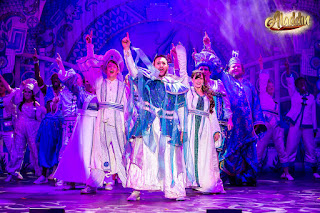 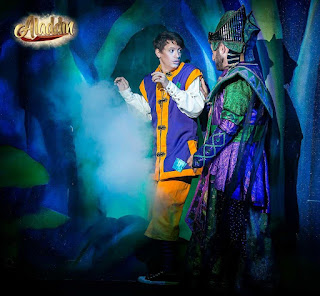 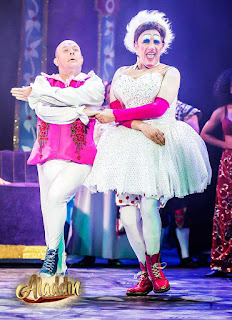 “Huge fun for kids of all ages”

Once again Curve has teamed up with The Rose Theatre, Kingston for its annual children’s Christmas show. After the success of previous productions of  The Cat in the Hat, George’s Marvellous Medicine and The Witches this year’s offering is Giraffes Can’t Dance based on the book of the same name.
Gerald the giraffe (Sophie Coward) has always wanted to go to the annual Jungle Dance but, being all long legs and even longer neck, is never going to make it past week one of Strictly. However a wise and friendly cricket, (Phyllis Ho) persuades Gerald to grasp the moment and, with the help from his Jungle Friends (Joshua Coley, Gracia Rios & Jason Yeboa) he finally finds his mojo.
This is an all singing, all dancing 55 minute show for every kid from 2 upwards. At today’s Press launch the audience covered the entire spectrum of ages and abilities with Curve’s very versatile studio space making room for several wheelchairs on the front row. Huge fun was had by all.
The cast work incredibly hard, not only on stage but beforehand as they gee up the kiddies so they are accepted before the show even starts. It meant that the audience were well versed in cheering and clapping and shouting out when needed.
The script includes loads of animal puns for the adults, an original score, many costume changes and a whole barrel of audience interaction.
Giraffes Can’t Dance is on until 31st December. STOP PRESS Run extended til 5th January 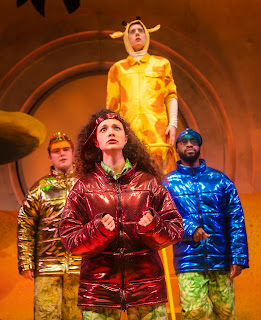 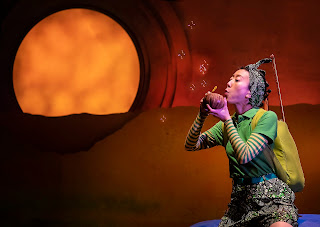 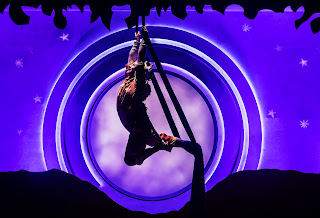 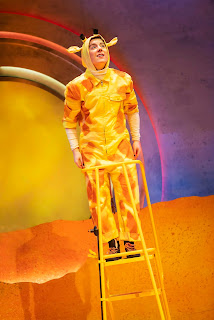 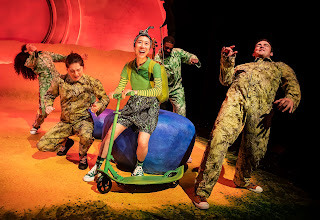 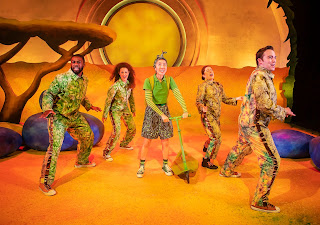